Back to History Contents

For the Advancement of Mathematics

University of the Witwatersrand, 31 October – 2 November 1983

Appendix 7: A Selection of Membership Numbers

1. The Society shall publish the official publication called the Notices of the South African Mathematical Society. It shall also publish the international journal Quaestiones Mathematicae.

(a) The Notices publishes items of general interest to members of the Society, in particular policy documents of the Society and calls for nominations (for Council members, for presentations of the Society, etc.) It also publishes inaugural lectures, abstracts of unpublished research, bibliographic details of departmental publications and accepted theses, news of personal movement and conference announcements.

(b) Quaestiones publishes quality research papers from all fields of mathematical sciences that should, however, reflect research interests of the mathematical community in South Africa.

3. If a three quarters majority of the whole Council is convinced that a Managing Editor runs a journal in a way that is in breach with the Society rules, the Council can suspend this Editor from his/her duties and can co-opt an Acting Editor. The suspension shall last until the first Annual General Meeting following the suspension. The matter is then referred to the Annual General Meeting for a decision that shall be binding on all parties.

4. In consultation with the Council, the Managing Editor of Quaestiones shall appoint the Associate Editors of Quaestiones. The appointments shall be for a fixed term determined by the Council with a view to ensuring continuity in the Editorial Team.

6. Financial matters are currently regulated by a contract with the Publisher (NISC). In the case of renegotiation of the contract or of signing of a new one, the Society shall be represented by the Managing Editor, the President and the Financial Manager. The Editors’ accounts for the Notices and Quaestiones shall be the responsibility of the SAMS Financial Manager office and will be subjected to an annual external audit.

President: The President shall provide leadership to the Society, and fulfil management functions. She/he is the Chair of Council, and oversees all portfolios on Council. She/he chairs the Annual General Meeting. She/he shall, through the Society espouse and promote the cause of Mathematics in South Africa.

General Secretary: The General Secretary shall take responsibility for the administrative function of the SAMS. She/he promotes communication between members of the Council and between the Council and the members of the SAMS. The General Secretary makes the arrangements for Council meetings and the Annual General Meeting, and writes the minutes of these meetings. She/he answers inquiries by members, students and other organisations, and organises the nominations for the award of the SAMS Bronze Medal for outstanding Honours students in Mathematics and Applied Mathematics at South African universities. The correspondence of the SAMS as well as the filing of documents relating to the SAMS (including archival matters) goes through the office of the General Secretary. She/he shall administer the nomination process whenever there is a vacancy on Council.

Scientific Activities: The Council member for Scientific Activities shall take responsibility inter alia for SAMS visitors, SAMS Conferences and Workshops, and SAMS publications. She/he is not expected to be the actual organizer in all of these activities, but if not should be actively involved at least to the extent of representing Council in these matters. Where there is no standing structure for a particular scientific activity within the SAMS the portfolio holder is expected to take the lead. She/he should keep records of all matters relating to the above and serve as Council’s memory on these matters.

Public Relations Officer: The PR Officer for SAMS is largely responsible for publicizing the Society and its activities as well as the field of Mathematics. On the one hand, publicising the Society involves increasing the public profile of the Society through appropriate activities. On the other, the PRO needs to be involved in initiatives that ensure the popularising of Mathematics. Both these duties will involve fundraising.

Liaison: The Council member for Liaison and Public Relations shall take responsibility for liaising with such other Mathematical Societies as the SAMS may wish to interact with: overseas (e.g. the AMS, MAA, SLAM, LMS, DMV, etc.) as well as African (e.g. the AMU) and Southern African (e.g. AMESA, SAMSA, ORSSA, SAARMSE, etc.). She/he shall take responsibility for the SAMS role in ICSU; and for reciprocity agreements of the SAMS. She/he shall be responsible for maintaining and updating of the WWW-site of the SAMS.

1. The nominations for the members of council together with a short CV of each nominee shall be published in the volume of the Notices which appears directly before the AGM takes place.

2. Together with the publication of the nominations a voting card will be included in that volume of the Notices.

3. The Secretary in cooperation with the Treasurer make sure that only those colleagues receive that volume of the Notices which are not in arrear with the membership fees.

5. For the election at the AGM and for the postal vote these voting cards are used.

6. Every paid-up Full Member of SAMS is eligible for nomination.

7. Election to Council shall be by majority of the votes at the AGM and the postal votes which have to be received by the Secretary before the AGM (and are opened only when the counting at the AGM begins).

8. For the election to Council two election officers are appointed by the Council in office.

Furthermore it was decided that the April issue of our Notices publishes a Call for Nominations for Council Members so that for the September issue just before the SAMS Congress the documents mentioned above are available.

Here are some practical aspects of the election process which have to be taken into account.

a) It is the responsibility of the Council in Office to ensure that there are nominations for each of the 8 portfolios.

b) The Treasurer, in cooperation with the Secretary of SAMS, produce a list of those members of SAMS who have the right to vote, i.e. who have paid their fees up to the year 2003 before the AGM takes place. This list (voters roll) is published together with the list of nominees and their short CV’s, and the names and addresses of the two electoral officers. If colleagues pay their fees at the SAMS Congress the updated list is used.

c) In the event that there is any delay in the publication of the Notices the Council in office has to ensure that every member of SAMS is informed about the list of nominees, their CV’s and the updated voters roll.

a) The election of Council Members is done by secret ballot at the AGM using voting cards. There, the letters with the postal ballots are opened.

b) At the AGM the names of the colleagues who want to vote is checked against the ‘voters roll’.

d) If there is only one nomination for a portfolio this nominee is elected automatically.

a) Those who prefer to vote by postal ballot have to ensure that their letters which contain the 8 voting cards reach the Secretary at least 2 weeks before the AGM.

b) These letters which carry the name and the address of the voting member are not opened before the election at the AGM. The Secretary/Treasurer checks the names on these letters against the ‘voters roll’ for this election.

a) For each portfolio there is a voting car.

b) The set of 8 voting cards is published in the Notices together with the list of nominees and their CV’s. 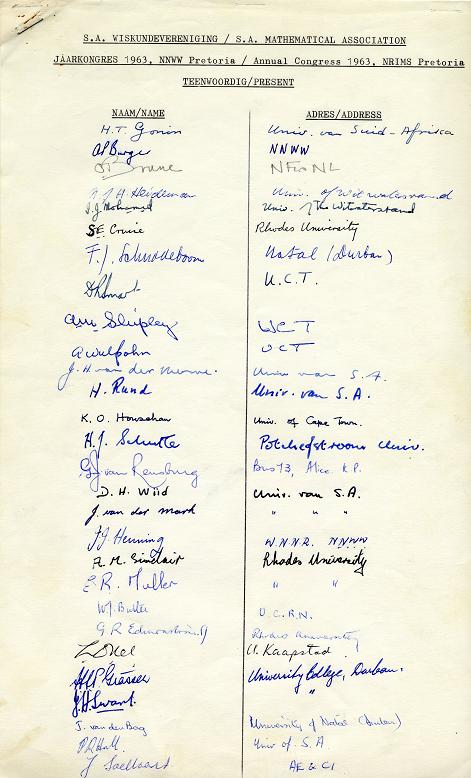 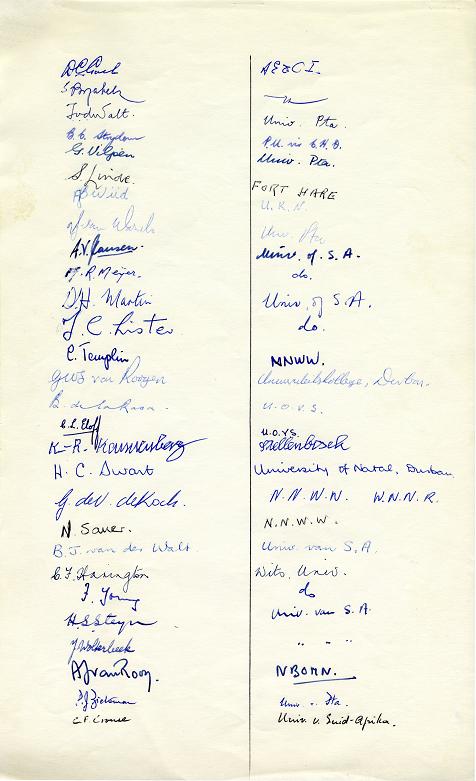 Back to top
Back to History Contents